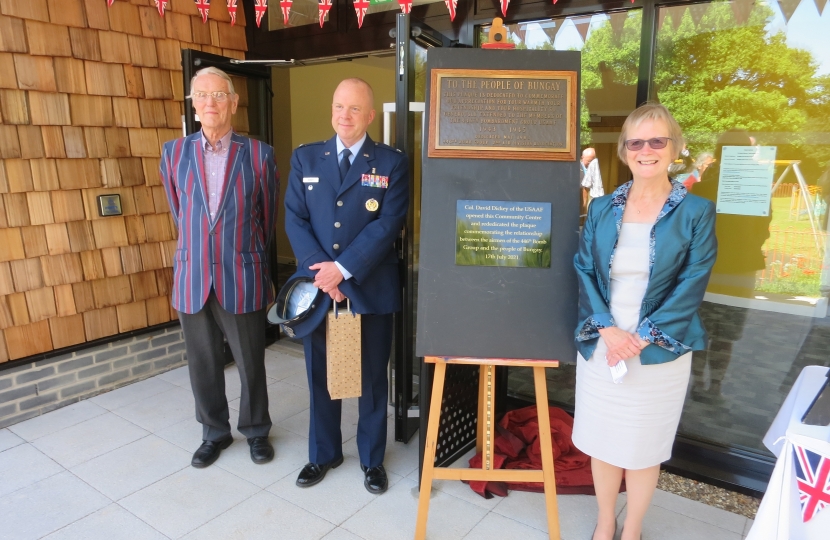 Cllr Judy Cloke, Ward member for Bungay & Wainford is also the Chairman of Bungay Community Centre Trustees. For more than 30 years, the Trustees have worked tirelessly to raise funds to build a new community centre for the market town. With the assistance of Suffolk County Council, a loan from the Town Trust, help from local builders and large funding from CIL grant, last week saw the opening of a new Community Centre in Bungay.

The new Community Centre at the rear of the playing field at Old Grammar Lane, replaces the old Honeypot Centre which was built almost 80 years ago. The old centre was previously two HORSA agricultural buildings joined together in the 1930s. Subsequently, the building was used as a Navy, Army and Air Force Institute, a social club for the airmen of the 446th Bomb Group USAAF, then by the ‘The Bungay Buckaroos’, who moved to nearby Flixton in 1944.

The building became well beyond its useful life, and much of the whole building was unusable. In the 1980s, the Veterans’ group visited, presenting a brass plaque and citation, these were removed before demolition.

Bungay Reeve Judy Cloke, chair of the trustees of the Bungay Honeypot Centre, said: "The new building is all singing, and dancing and I am absolutely delighted with it. It has been such a long haul to get here, with an awful lot of work, but this is extremely important for Bungay because there are so many local groups who want to hire our facilities.

"The old centre, although it had a faithful following, had become unfit for purpose.”

Plans were lodged with East Suffolk Council in 2019 to demolish the Honeypot Centre, on Upper Olland Street, and build four bungalows and garages.

Cllr Cloke said: "The builders, Sprake and Tyrrell who built the new centre, are very high quality and I am looking forward to seeing the new bungalows. We would not have been able to build the centre without the support of then-Waveney District Council, county councillor David Ritchie, Bungay Town Trust and Bungay Medical Centre."

The new centre includes a kitchen, a fully functioning lecture room and a large room which can be divided in two.

At the opening of the new Community Centre, Col David Dickey, from USAAF Lakenheath visited to rededicated the original plaque, unveiled a new one and open the new centre.