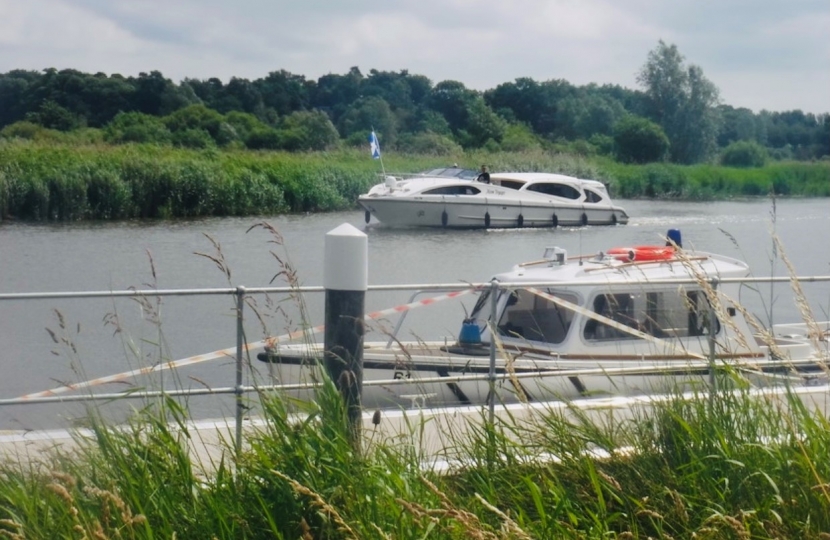 Cllr Andree Gee is the Ward member for Oulton Broad, she also represents East Suffolk Council on the Broads Authority Working Group. Last week, Andree and other members of the Working Group made their annual site visit to see what has been achieved in the areas covered by the Authority since their last visit.

The Norfolk and Suffolk Broads is Britain’s largest protected wetland and the third largest inland waterway, with the status of a national park. It’s also home to some of the rarest plants and animals in the UK. Established in 1989, the Broads Authority is responsible for conservation, planning, recreation, and waterways.

The Authority has been closely associated with the Carlton Marshes project and includes funding for the purpose of purchasing land that had been converted to farmland producing cereal crops during the 1970s and 80s. This had caused serious damage to the local ecology over the following years. By recreating the natural wetlands and carefully managing the water levels, not only did the land revert to its natural state which was created by the original digging out of the Broads many centuries ago, but the flood risk to the village of Oulton Broad has been reduced.

The Broads Authority has also worked closely in partnership with Suffolk Wildlife Trust in the development of the new Visitor Centre, providing funds, expertise, and Rangers to work on both land and water. The Norfolk (and Suffolk) Broads are now designated as a National Park, with great potential to attract major tourism to the area, including ours, and this is already noticeable in the number of visitors, even though the Centre has not yet officially opened.

During their visit, the Working Group heard presentations on the ‘Water, Mills and Marshes’ project which is training young students from Norwich City College to restore some of the many old mills that are such a feature of Broadland, particularly on the Halvergate marshes, which have the greatest concentration of such mills in the whole of Europe.  The Group also heard about the European based ‘Canape’ (Creating a New Approach to Peatland Ecosystems) project which involves the management of the many reserves of peat in marshland. Globally, drained peatlands are responsible for 5 % of all man-made greenhouse gas emissions. However undrained peatlands capture carbon from the air, having a positive effect on global sea level rise and climate events.

As Andree Choveaux, I represented Oulton Broad as councillor from 1979 to the early 1990s, and was chairman of the Planning Committee and vice chairman of Waveney District Council.